Interrelatedness and the Emerging ‘One Health’ Paradigm: Humans, Animals & Ecosystems

In this post, Dr. Susan Kopp explains the “One Health” model, and how this theory calls on all of us to commit to a life of environmental stewardship.

In recent years, the “One Health” (OH) model has emerged as an important and comprehensive approach to global ecological, health, and policy concerns. The paradigm is rooted in the concept of interconnectedness, or interrelatedness.  And, precisely because of this, it seems that it could be a paradigm in synchrony with the teachings of a number of faith traditions, and thus one that would be welcomed by society at different levels, secular and religious, for the value placed on both the human person and the whole of the created world.

The Centers for Disease Control (CDC) define OH as an approach to global and community welfare based upon the recognition “that the health of humans is connected to the health of animals and the environment.” Often illustrated with three intersecting circles representing human health, animal health, and ecosystem health, OH is not restricted to health issues alone, but rather the reference is figurative (as well as literal), and refers to the well-being, equilibrium, homeostasis, and sustainability of these three aspects in relation to one another.

The paradigm, after a century of latency, is again being brought to the forefront by  academic, institutional, scientific and professional bodies, and resonates most strongly among our youth. In recent years, the CDC, the United Nations, the European Union, and the World Bank have all recommended OH models. In the US, supporters include the American Medical Association (2007), the American Veterinary Medical Association (2008), and the Wildlife Conservation Society. Various OH approaches and project initiatives are being jointly funded and enacted by one or more conservation, public health and veterinary agencies. Ideally, researchers should assess health and ecosystem concerns as interdisciplinary teams of ecologists, conservation experts, physicians, veterinarians, public health, and others. 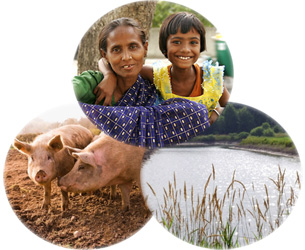 The One Health Model: The interrelatedness of humanity, animal life, and the environment. Photo courtesy of the CDC

This approach, however, also brings to light the challenges in addressing issues that are growing in complexity. Depletion of resources, drought, deforestation, and toxic pollutants affect all three ‘circles.’ Attempts to approach challenges from all three perspectives — human, animal and ecological – raise ethical questions: What if the seemingly ‘correct’ answer to a crisis might disproportionately impact one of the three ‘circles’ to a great degree? How is potential loss of biodiversity weighed against improved human water quality and food safety, or the risk of ecosystem collapse in fragile regions?  Ecosystem health and assurance of biodiversity must be respected for the future of the planet, while at the same time human and domestic animal populations must be given equal consideration; how and what might be the guiding principles for such decision making?

In 2011, the United States Presidential Commission for the Study of Bio­ethical Issues responded to ethical quandaries in synthetic biology by proposing an ethical framework   guided by these five principles: public beneficence, responsible stewardship, intellectual freedom and responsibility, justice and fairness, and democratic deliberation, which is defined as ‘an approach to collaborative decision-making that embraces respectful debate of opposing views and active participation by citizens’. The involvement of citizens in sustainable paradigms and views of ecology is urgently called for.

From a moral and faith perspective, OH seems to contain great promise and could be aided by a vision of interrelatedness offered by paradigms of reciprocity, communion, and respect for all living beings and ecosystems. To those who encounter it, the idea of three intersecting circles ‘feels right’ and, almost intuitively, persons understand and adhere to the underlying principle at its basis, as if we were made for such an approach.

I believe this is for several reasons. Human beings are made for relationships; it is in our DNA. This is exemplified by OH: Nearly all persons, in some way, have seen the value of the created world both in sustaining human life and for its own intrinsic value. Similarly, by acknowledging the necessary connection between the well-being of ecosystems, domestic animals, and human development, we draw a diagram of the ‘common good’ as one including all three realms and calling us to a sustainable vision that values both the created world as well as the human person, without diminishing the value of one or another (a charge that sometimes hampered faith traditions in the past from fully embracing the ecological importance of valuing all of creation and giving priority to ecological initiatives).

In his 1990 message for the World Day of Peace Pope John Paul II wrote:  “… we cannot interfere in one area of the ecosystem without paying due attention both to the consequences of such interference in other areas and to the well-being of future generations.”  A model such as OH could serve to foster greater consciousness around this interrelatedness of all creation and ensure continued respect and support for human development while at the same time respecting the integrity of nature and other living beings.

Additionally, collaboration with believers of various religions around an OH approach to global challenges has the power to facilitate dialogue and understanding both at an environmental level and beyond. In this regard, the upcoming Teach-in has the power to fill a niche that had previously been void: Young people are more engaged than ever, and, as the next generation of leaders, they feel that environmental stewardship is their responsibility. Through sharing their faith and work convictions with one another, they will be able to establish fundamental yet often forgotten connections between faith, life, and the earth.

Excerpted with permission from a talk given by the author at the ‘Natural Relationality & Environmental Awareness’ EcoOne Conference, Castel Gandolfo, Rome in April 2014.

Pope John Paul II, 1990. Message of His Holiness John Paul II for the Celebration of the World Day of Peace, http://www.vatican.va/holy_father/john_paul_ii/messages/peace/documents/hf_jp-ii_mes_19891208_xxiii-world-day-for-peace_en.html  (Accessed March 22, 2014).